Beethoven was born in Bonn. His musical talent was obvious at an early age, and he was initially harshly and intensively taught by his father Johann van Beethoven. He was later taught by the composer and conductor Christian Gottlob Neefe, under whose tuition he published his first work, a set of keyboard variations, in 1783. He found relief from a dysfunctional home life with the family of Helene von Breuning, whose children he loved, befriended and taught piano. At age 21, he moved to Vienna, which subsequently became his base, and studied composition with Haydn. Beethoven then gained a reput ...
Read full article 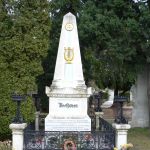