According to his friend and FINA President Ante Lambasa, Sandic learned to swim and started playing water polo at an early age in Makarska, the birth town of his mother where he spent his summers. However, it was not until age 16 that he began playing water polo for club Partizan, a member of the second division of the Yugoslav Water Polo League. As a member of this club Sandić played more than 1000 games and won 11 Yugoslav National Championships, 7 Yugoslav Cups and 5 European Cups, in 1964, 1966, 1967, 1971 and 1975.[2][3]
Read full article 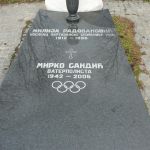